How to choose the best futon mattress

Ah, the futon. We’ve all been there. Besides being a really fun word to say, futons are a valuable part of people’s homes. Being able to switch from a piece of furniture to a bed in a matter of seconds is a very prized possession to have in your home. Plus, it saves a lot of space instead of simply having a mattress hidden behind a door. 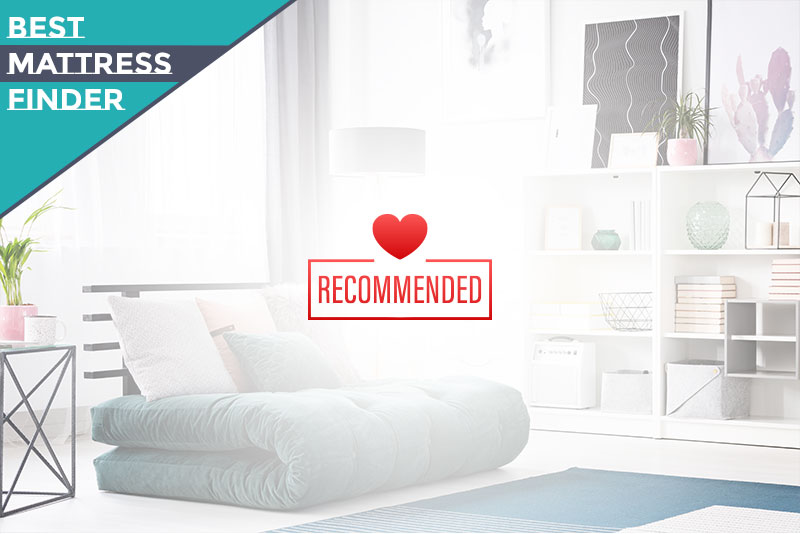 Futons are unfoldable and flexible and serve a double purpose, they’re beds and couches at the same time.

The style and mattress you should choose depends on whether it’s going to be used as a couch or as a bed which is completely dependent on what their owners want to do with it.

Before you get choosing, you’re going to need to measure the space in your room where your new futon will go. It’s obviously essential to make sure you have the measures correct for when the futon lays flat so it’s not obstructing other furniture or the walls.

You’ll also need to consider which materials you want your futon to be made out of. Basic metal frames are the most common and the least expensive. They’re great for apartments and basements. Wood frames are a little bit better looking and are equally effective.

When choosing a futon, you’ll need to do so based on comfort and thickness. Cheaper futons are going to be very thin and it will result in sleepers being able to feel the frame underneath. Thicker mattresses can be a lot more comfortable but they cost a little bit more and sometimes they can be too hard. So ideally, you look for a little bit of both and try to land with something that’s medium-hard. When choosing a futon, you’re also going to want to check out what the mattress is made from. Traditionally, futon mattresses are made from cotton, a cotton/foam mix, polyester, or wool.

If you want a mattress that doesn’t weigh as much, you’re going to want to look for futon mattresses made out of cotton and foam. The cotton/foam combo helps to make sure the mattress keeps its shape and doesn’t sag into the floor. For sleepers looking for a light futon mattress, the cotton and polyester mix is a flexible and known to be very soft while still maintaining its shape.

If you want your futon mattress to be super soft, give the cotton and wool combo some serious consideration. With the combo of wool and cotton, you’d be sacrificing the futon’s flexibility. But just think about how soft it would be to sleep on wool. Especially on wool that can transformed into a couch. It’s almost a no brainer. 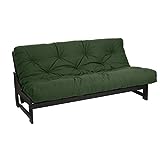 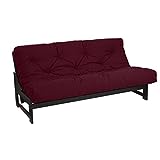 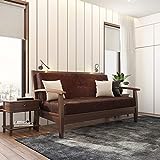 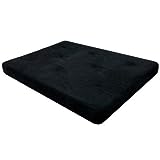 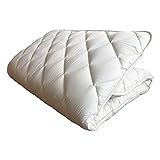 Like with the different types of mattresses, to make the proper choice of a mattress, you’ll need to determine how you’ll sleep on the futon.  Obviously, there’s the factor of futons being dual citizens and working both as a bed and a couch but other factors should come into play when choosing a futon mattress and it depends on what type of sleeper you are.

A sleeper’s physique can make a major difference when it comes to choosing a mattress. People who carry more weight might want a futon mattress that is thick and gives a lot of support and lighter sleepers will want to consider something a little bit more on the soft side.

For optimal futon usage, sleepers should be looking to get a mattress that is about eight inches thick and higher. Anything lower should be used for people who want to save a few bucks or are mostly interested in using a futon sparingly because anything less than eight inches will usually make for pretty uncomfortable sleeps.

People who have a lot of allergies are also going to want to look into hypoallergenic brands and mattresses that are eco-friendly, which does not consist of too many chemicals.

Once you’ve made your size, mattress, and firmness decision, you’ll want to narrow down a budget. Once you have your budget, you can start researching. Researching is a great way to expand your knowledge and really zone in on which futon you want. Get a good balance of retail websites and user comments to get both the manufacturer's opinion and some unbiased one from the good people of the world wide web.

And when all is said and done, you can’t go wrong with a futon (does that rhyme?) They’re inexpensive, decently comfortable, and you can’t put a price on how valuable it is to be able to turn a couch into a bed on a whim for those late nights when your friends need a place to sleep.

About the Author: john